He is a commercial photographer with a diverse field of expertise that includes corporate work, theater, studio portraiture, travel, food, architecture and interiors. In addition to proudly working as production photographer for The Broadway Training Center, he also is head visiting photographer for The Ruben Dario National Theater in Managua, Nicaragua. His list of corporate clients in the New York metro area and worldwide is broad and diverse ranging from international magazines, hotels, major corporations and many more.

His stock photo portfolio of over 5,000 images is represented and sold internationally by 9 agencies including Istockphoto, Dreamstime Photo, Shutterstock, Fotolia and others. He sells 15,000+ images annually.

While matriculating at The George Washington University for a B.S. in psychology, Rob coordinated a program studying filmmaking and photography at the Corcoran Gallery of Art School in Washington, D.C. Upon returning to the New York area he furthered his education studying under renowned professional photographers at the International Center of Photography in New York City.

Rob is very proud to be a part of the talented team at Broadway Training Center and enjoys working with Jason, Fiona, the crew and the extremely talented troupe of actors. www.rjlerich.com 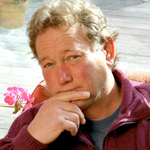